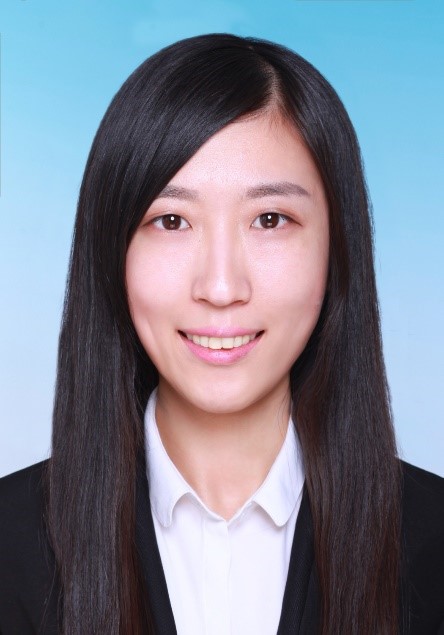 Dr Wei Mu, a PhD graduate from the University of Chinese Academy of Science in Beijing, has been a postdoctoral fellow at the Moffitt Cancer Center for the past four years.

Her research interests involve the development of machine learning models to analyze multimodal medical images for the early diagnosis of cancer and to aid in the decision of individualized treatment planning. Her dissertation pioneered work in automatic segmentation methods and texture analysis of FDG PET images to improve prognostic models for both cervical and colorectal cancers. She continues her work in PET image analysis at Moffitt Cancer Center by developing additional PET/CT radiomics features through convolution of PET and CT images.

Dr. Mu has received several awards for her work over the last few years. She is the recipient of the Outstanding Student and Graduate Award from her undergraduate school and received several scholarships to the University of Chinese academy of Science. She was one of four finalists in the 2020 WMIS Young Investigator Award and recipient of the Women in Molecular Imaging Network Scholar Award from WMIS. She is an author on over a dozen peer-reviewed articles.

Drs. Bob Gillies and Shari Pilon-Thomas were recently awarded an NIH/NCI R01 for $1,878,475 over five years for a research project titled “Imaging Acidosis and Immune Therapy in PDAC." This is Dr. Pilon-Thomas's first R01. Congratulations!

Drs. Bob Gillies and Bethany Niell were awarded an NCI R01 of $3,430,507 over 5 years for their research project titled “Radiomics and Pathomics to Predict Upstaging of DCIS."

Co-Investigators on the project are Drs. Dana Ataya, Marilyn Bui, and Brian Czerniecki.

Robert J. Gillies and his lab are focused on understanding cancers as complex, heterogeneous and dynamic systems. Along with his long-time collaborator, Robert A. Gatenby, they share a core belief that, due to genomic plasticity and microenvironmental heterogeneity, cancers can only be understood through the lens of Darwinian Evolution. Dr. Gillies is an experimentalist whose work spans molecular, cellular, animal models, and image analytics. He is the Martin Silberger Chair of Cancer Physiology, Director of the Center of Excellence in Cancer Imaging and Technology, and Scientific Director of the Small Animal Imaging Lab, SAIL. 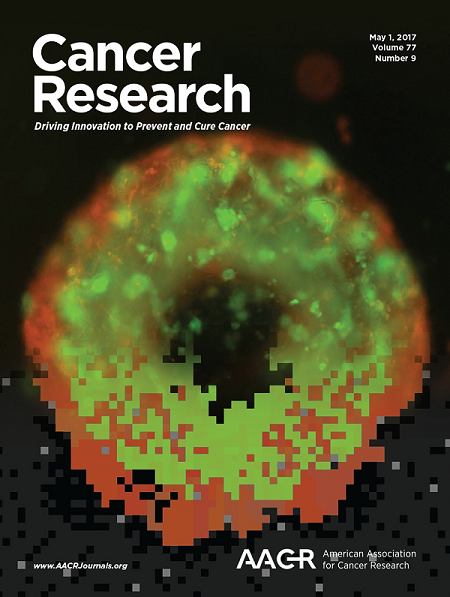 A research article titled "Preclinical evaluation of [225 Ac]Ac-DOTA-TATE for treatment of lung neuroendocrine neoplasms" was recently published in European Journal of Nuclear Medicine and Molecular Imaging.

There is significant interest in the development of targeted alpha-particle therapies (TATs) for the treatment of solid tumors. The metal chelator-peptide conjugate, DOTA-TATE, loaded with the β-particle emitting radionuclide 177Lu ([177Lu]Lu-DOTA-TATE) is now standard care for neuroendocrine tumors that express the somatostatin receptor 2 (SSTR2) target. A recent clinical study demonstrated efficacy of the corresponding [225Ac]Ac-DOTA-TATE in patients that were refractory to [177Lu]Lu-DOTA-TATE. Herein, investigators report the radiosynthesis, toxicity, biodistribution, radiation dosimetry, and efficacy of [225Ac]Ac-DOTA-TATE in small animal models of lung neuroendocrine neoplasms (NENs).

Results from the study suggest significant potential for the clinical translation of [225Ac]Ac-DOTA-TATE for lung NENs.

Cells need energy to survive and thrive. Generally, if oxygen is available, cells will oxidize glucose to carbon dioxide, which is very efficient, much like burning gasoline in your car. However, even in the presence of adequate oxygen, many malignant cells choose instead to ferment glucose to lactic acid, which is a much less efficient process. This metabolic adaptation is referred to as the Warburg Effect, as it was first described by Otto Warburg almost a century ago. Ever since, the conditions that would evolutionarily select for cells to exhibit a Warburg Effect have been in debate, as it is much less efficient and produces toxic waste products.

“The Warburg Effect is misunderstood because it doesn’t make sense that a cell would ferment glucose when it could get much more energy by oxidizing it. Our current study goes to the heart of this problem by defining the microenvironmental conditions that exist in early cancers that would select for a Warburg phenotype. This is important because such cells are much more aggressive and likely to lead to cancers that are lethal,” said Mehdi Damaghi, Ph.D., study first author and research scientist in the Cancer Physiology Department at Moffitt Cancer Center. 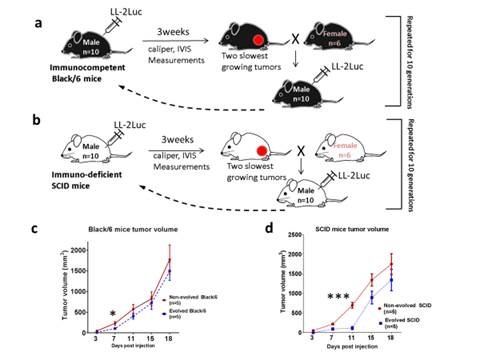 In this publication, we have bred a line of SCID  and Black/6 mice that are more resistant to cancer malignancy than their wild type relatives using a subcutaneous inoculation paradigm with LL/2-Luc-M38 cancer cells. Our results show that the evolved phenotype results from different mechanisms in each strain. In the SCID mice, suppression of tumor growth was through the change in the biology of the stromal cells, most likely the skin fibroblasts, and in Black/6 mice is through the increase in the immune-mediated killing of cancer cells. 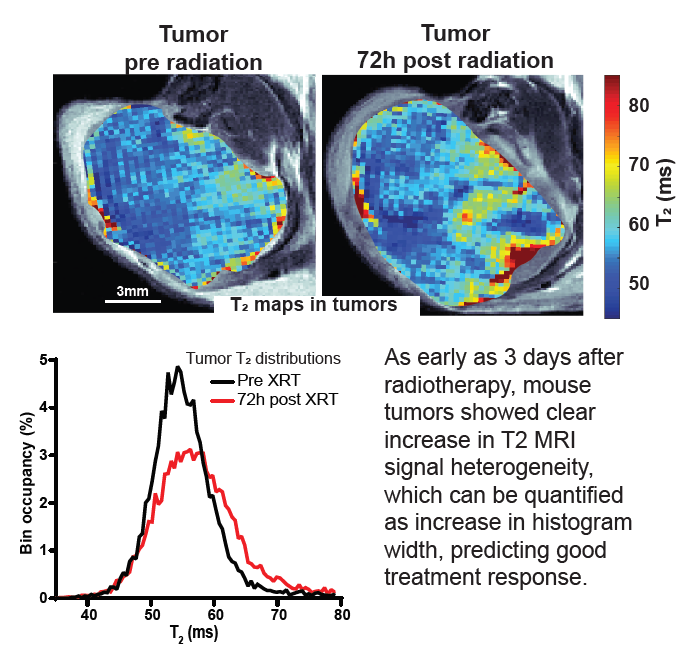 Response to radiotherapy is a complex function of multiple factors, and patients vary significantly in the extent to which irradiation helps slow the development of their disease. This is particularly important in pancreatic cancer, where short progression times mean that timely and effective treatment is crucial. In this paper we show in mouse model of pancreatic cancer, that analysis of T2 mapping in Magnetic Resonance Imaging coupled with appropriate analysis can be used to capture the early signs that relate to the degree of radiotherapy response later on. Our method, validated against histological data, allows to quantify the amount of inhomogeneity (“heterogeneity”) in the images which relates to the early signs of the desired harmful effect of the radiation on tumor tissue. In the future this method can be tested clinically and ultimately used to help personalize radiotherapy for pancreatic cancer patients. 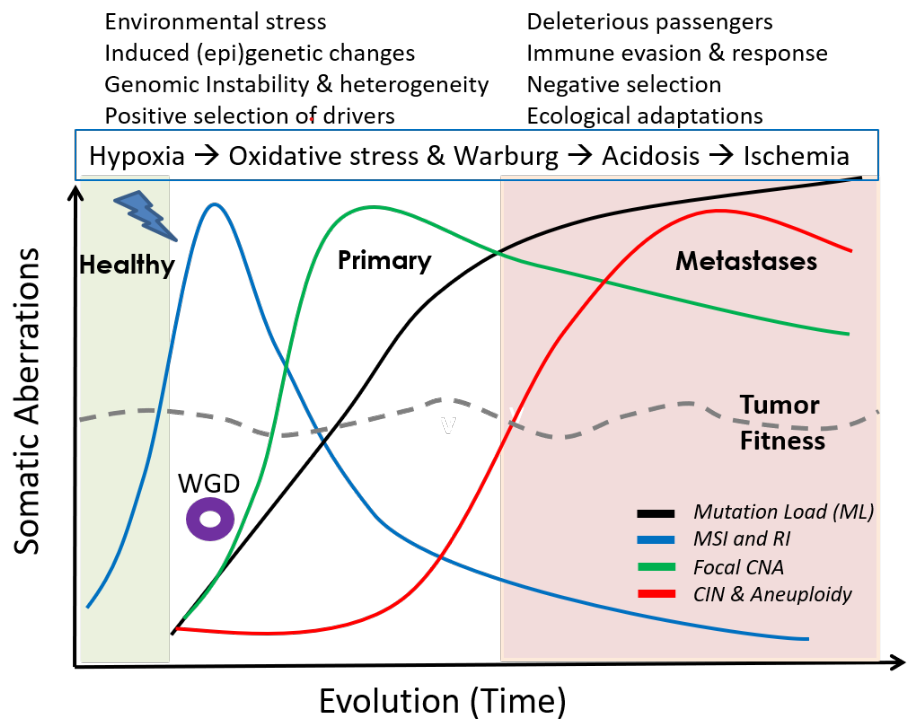 A synthesis of mutational and clinical patient data, combined with literature from different independent laboratories, provides insights into the rich, temporal dynamics and compensatory roles of different genomic aberrations in tumor evolution, and their relation to phenotypic plasticity; explaining how cancers remain fit over time. A small step towards the general rules of cancer evolution, and a road map for cancer early detection and development of smart therapeutics. 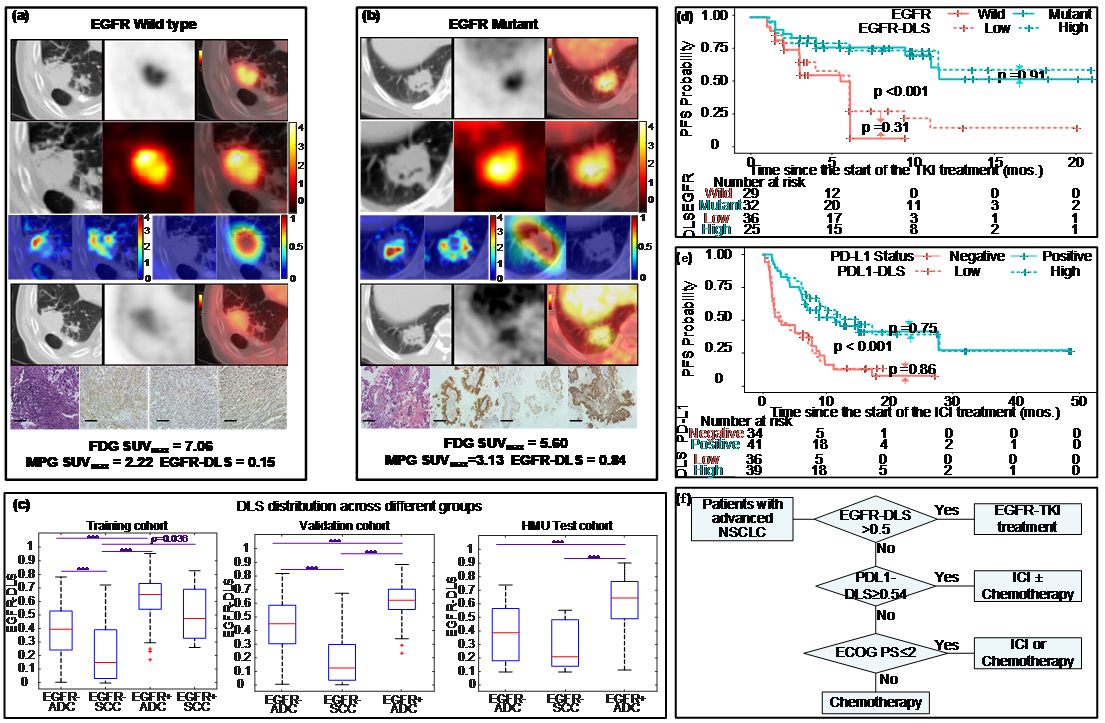 EGFR, or epidermal growth factor receptor, is a common mutation found in non-small cell lung cancer patients, and can be a predictor for treatment. However, the current biopsy-based detection techniques are invasive, and may fail to yield actionable results due to insufficient quantity or quality of the tissue. In this work, we developed a deep learning model to predict EGFR mutation using 18F-FDG PET/CT images since it is widely used and the glucose radiotracer used could be affected by EGFR activation and inflammation. Further, we found that the EGFR deep learning score was positively associated with longer progression free survival in patients treated with tyrosine kinase inhibitors (TKI), and negatively associated with durable clinical benefit and longer progression free survival in patients being treated with immune checkpoint inhibitor (ICI). Therefore, together with our previously developed PD-L1 deep learning prediction model using PET/CT images, we developed a non-invasive treatment decision support to make treatment plan. 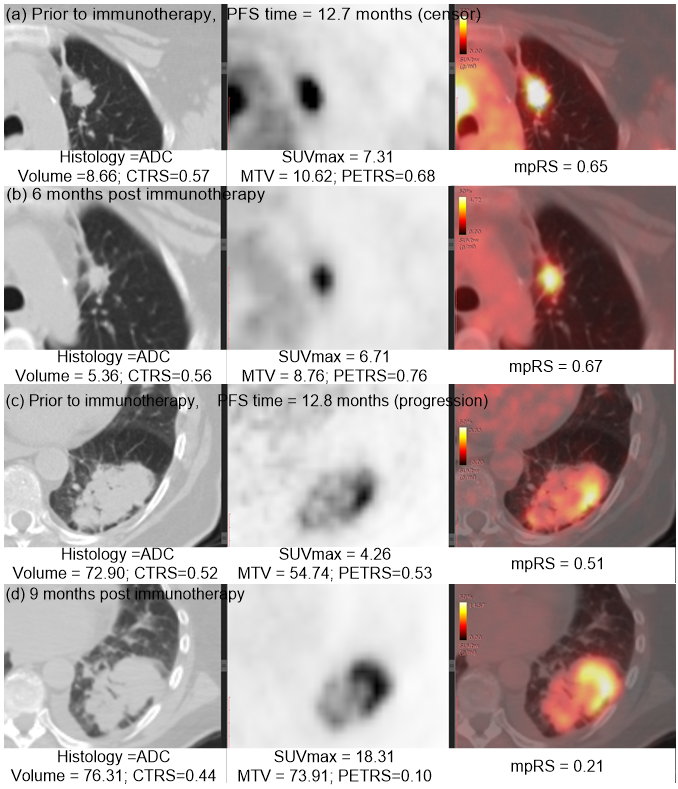 Immunotherapy has improved outcomes for patients with non-small cell lung cancer (NSCLC), yet durable clinical benefit (DCB) is experienced in only a fraction of patients.  Therefore, we developed an effective and stable radiomics signature by the combination of PET, CT and the fusion Kullback–Leibler Divergence features, which may serve as a predictive biomarker for immunotherapy response. This signature could be used prior to initiation of immunotherapy to identify NSCLC patients most likely to benefit from immunotherapy, and could also be leveraged to improve the non-invasive treatment decision support in the treatment of advanced NSCLC patients.

Research Scientist, Mehdi Damaghi, in Gillies lab was co-lead author a paper recently published in Nature Communications that utilized a systems analysis of intracellular pH vulnerabilities for cancer therapy.  The team, which included Dr. Bob Gillies, and John Cleveland, developed a computational methodology that explores how intracellular pH (pHi) can modulate metabolism. Experimental testing of the novel strategy revealed that it is particularly effective against aggressive phenotypes. The study suggests essential roles of pHi in cancer metabolism and provides a conceptual and computational framework for exploring pHi roles in other biomedical domains. Moffitt's Molecular Genomics and Analytical Microscopy cores were also utilized.

Their opinion posits that temporal changes in blood flow are commonly observed in malignant tumors, but the evolutionary causes and consequences are rarely considered. The authors propose that stochastic temporal variations in blood flow and microenvironmental conditions arise from the eco-evolutionary dynamics of tumor angiogenesis in which cancer cells, as individual units of selection, can influence and respond only to local environmental conditions.

Temporal variations in intratumoural blood flow, which occur through the promotion of cancer cell phenotypes that facilitate both metastatic spread and resistance to therapy, may have substantial clinical consequences.

Quantitative Imaging is an indispensable approach to study intratumoral heterogeneity. Dr. Gillies' group develops and applies Image Analytics to histological and radiological images to investigate the spatial relationships of cells and microenvironments in clinical and pro-clinical tumors. 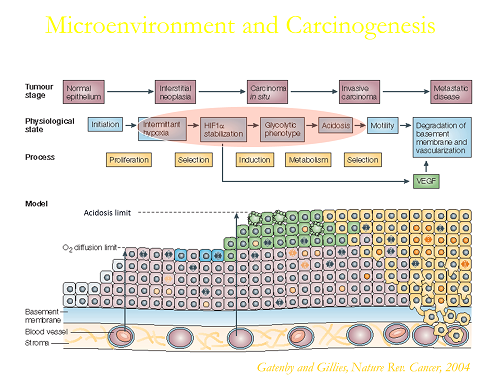 Solid tumors are acidic due to elevated glycolysis combined with poor perfusion. Dr. Gillies has developed methods to image tumor pH, and study the causes and consequence of this acidity. Recent focus has been on developing methods to interfere with tumor acidosis for improving therapy in the clinic.